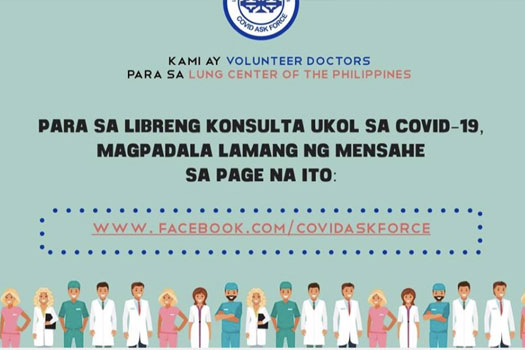 It has been a month since President Rodrigo Duterte put the entire island of Luzon (where Metro Manila is located) under Enhanced Community Quarantine (ECQ), and every single day the apocalyptic nature of this corona virus crisis that has bunkered 63 million people (57% of Filipinos live in Luzon) in their homes is announced by all forms of media. The daily wage earners: tricycle and cab drivers, construction workers, market and street vendors, contractuals, service industry workers, all are painfully at a loss over how to put food on their tables. They were taught to work every day to earn their food– they are not even allowed to do that now.

The elite, civil society, and the church were quicker than the government to donate and raise funds, outsource personal protection and other medical equipment and consolidate donations and a master list of hospitals and medical centers nationwide which might need these, and pack meals for the health workers at the frontlines of the war against the disease. And it was women who initiated these efforts and tapped into their huge networks. They were the first to step up to the challenge, including Vice President Leni Robredo, the highest-ranking woman official of the land, who responded promptly by distributing protective equipment to hospitals and launching a shuttle service for health workers stranded by the transport lockdown. The TOWNS (The Outstanding Women in the Nation’s Service) Foundation, a group of women achievers in different fields, with the help of major conglomerates and private donors, and together with University of the Philippines Medical Foundation, also sourced and immediately distributed scarce protection equipment to the big hospitals which have the biggest number of COVID-19 patients.

Many homes donated money to mobile kitchens serving poor areas, and paid their washer-women and their drivers their regular salaries even if they didn’t report for work. Many employers, including universities, continued to pay salaries whether or not staff could continue to work from their homes. 700 doctors got together to offer online consultation so as to discourage physical checkups and decongest hospitals. Psychotherapists also offer online counseling and other psycho-social services. Artists and actors give online seminars on almost any art form and access to concerts or art exhibits, old or new. Thesis defenses continue on Google Hangouts and meetings to craft a new normal or post-corona social behavior and work ethic are held on Zoom. Fashion designers turned to sewing facial masks and protective wear. Children write loving messages and draw art for the front liners. Church bells are rung, pots and pans are struck to drive away the evil and to energize the front liners, Lenten traditions were celebrated online, and daily masses are heard in living rooms or bedrooms. The 4th 2019 Social Weather Stations survey (conducted December 13-19, 2019) released a week ago, and which says 83% of adult Filipinos believe religion is very important in their lives, is prophetic.

On March 24, ten days after the ECQ, the Philippine Congress granted President Duterte special temporary powers to manage the COVID-19 crisis that continues to rage in the country of 110 million people without their knowing exactly the incidence of infection. His new powers include directing private hospitals and medical facilities to house health care workers and serve as quarantine centers, and take over public transport operations to ferry frontline workers, which his Inter-Agency Task Force (IATF) eventually did. But most importantly, it authorized Duterte to reallocate items in the 2020 national budget, some US$5 billion as emergency fund to deliver assistance to 18 million low-income households, help equip hospitals, and bolster testing. While many opposed this move and were suspicious of it, the consensus was since it’s time-bound, transparent with the budget allocation (which can be monitored), and required the president to weekly update the public, the majority moved to support it as battling the pandemic requires a highly synchronized and consolidated national response.

Mass testing in all health centers started only two days ago. Official Department of Health data: 5453 confirmed cases, 353 recovered, 349 deaths, therefore has yet a long way to go before the IATF can agree on a decision to lift the quarantine (as of April 17, 2020)

The government social amelioration package kicked in the third week of the ECQ as according to local government leaders, food packs had to be first sourced and then distributed. Many went hungry in the first week of the ECQ, violated the quarantine claiming hunger would kill them ahead of the virus. It was the private sector, both organizations and individual families and friends who filled in, distributed food packs or set up mobile kitchens and cooked in some of the areas. Unconscionable delays are partly caused by politicking (Government minded that other groups got ahead of them to the poor so much so that at one point they wanted private donations to pass through government first, a move they pulled back as it enraged netizens) and by total ill-preparedness. We have lived with these seasonal diseases for centuries: cholera, malaria, tuberculosis, and dengue fever (the first recorded dengue epidemic in Southeast Asia occurred in Manila in 1954), that we never took these viruses seriously.

Without extensive testing and accurate data collection, there will be no way to tell when the quarantine can be slowly lifted. While Dr. Raul Destura and his team at the University of the Philippines scientists invented a low-cost COVID-19 test kit made public on March 13, but it took time to get it approved and manufactured locally. 26,000 kits rolled out only on April 4. And in a poor country short on manpower for its health workers have left for other parts of the world where pay is better, Destura and his team knew we cannot afford a test that takes a total of about six hours — theirs employs a single-step multiple detection system with a turnaround time of one to two hours. Mass testing in all health centers started only two days ago. Official Department of Health data: 5453 confirmed cases, 353 recovered, 349 deaths, therefore has yet a long way to go before the IATF can agree on a decision to lift the quarantine (as of April 17, 2020).

While it may look like all countries, rich and poor are attacked by this novel crown of a virus, the World Health Organization (WHO) “has warned that while attention has shifted to epicenters in Western Europe and North America, COVID-19 epidemics are far from over in Asia and the Pacific.” WHO Regional Director for the Western Pacific, Dr. Takeshi Kasai warns “This is going to be a long-term battle and we cannot let down our guard. We need every country to keep responding according to their local situation.” Like many other countries, except for Hong Kong, Singapore and Taiwan (who suffered most from the SARS epidemic), our government acted belatedly. The first three COVID-19 patients were Chinese from Wuhan, and Patient 4 who traveled back from Japan. If they were immediately quarantined, or their contacts traced and quarantined a week after their symptoms showed, this would not have spread. The tourist destinations like Palawan, Batanes, and Puerto Galera had border checks in place since mid-January (I saw this firsthand when our office team went to Puerto on February 1– all foreigners were on another queue and checked for fever and cough, and if positive were quarantined or not allowed entry).

These days, deeply-held beliefs about poverty and wealth are being shaken up

These days, deeply-held beliefs about poverty and wealth are being shaken up. One social media post calls COVID-19 a disease of the rich (those who can afford to travel) and transmitted to their community of labor and service. The many poor who defenseless go about as usual and are sacrificed so the wealthy can survive. Another defines self-isolation as a luxury, and best for the rich who live in huge houses with manicured lawns and gardens, unlike the poor who suffer in the summer heat in small makeshift houses without air conditioners or fans, crowded in by at least six family members.

It always takes a pandemic to stop all of us in our tracks, and make us stare this truth in the eye.

It is an incredibly unequal world: that is the first thing I will say if asked to give one and only one description of where we are now. We all know it to some degree or another, especially and typically, in our Filipino homes where we have kasambahays (domestic helpers and drivers). But it always takes a pandemic to stop all of us in our tracks, and make us stare this truth in the eye. Historically, all the old plagues which crossed nations, did. And we would change some rules, give a little more in salaries and benefits to the poor and affected, and build a semblance of infrastructures to prepare for the next big one. All short-lived, all palliative, never going to the root cause, and the solution which without question as these times clearly point to, is absolute rejection of the system that exponentially generates and regenerates inequities.

31, March, 2020. Virtual press conference on COVID-19 in the Region. Opening remarks of Dr Takeshi Kasai, WHO Regional Director for the Western Pacific : .