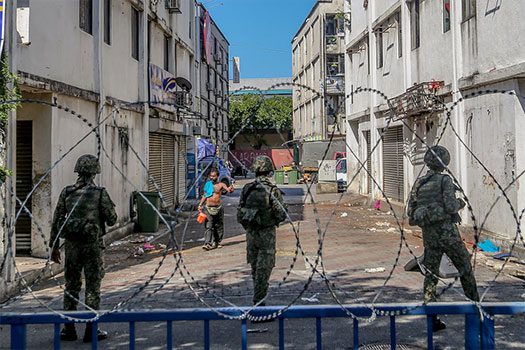 The Malaysian government enforced the Movement Control Order (hereafter, ‘MCO’, being the form of nation-wide ‘lockdown’ as it is known locally) beginning from the 18th of March, 2020, and had since been extended until the 12th of May, as the main centrepiece of its overall strategy to contain the Covid-19 pandemic within its borders.

The Malaysian government enforced the Movement Control Order (hereafter, ‘MCO’, being the form of nation-wide ‘lockdown’ as it is known locally) beginning from the 18th of March, 2020, and had since been extended until the 12th of May, as the main centrepiece of its overall strategy to contain the Covid-19 pandemic within its borders. The following ‘notes from the field’ represent a set of tentative observations and reflections on what seems to be taking shape over the past 45 days of the MCO restrictions, particularly how the present crisis reveals deep-seated tendencies and patterns within Malaysian society and the kind of governmentality that characterizes the Malaysian state. The perspective shared here is one situated within West Malaysia (where the author resides) and does not make any claims to be comprehensive in scope (policies and events discussed below are admittedly Peninsula Malaysia-centric, at the expense of more nuanced differences and details pertaining to Sabah and Sarawak).

Prelude to ‘Lock-down’: A Tale of Political Intrigue & Missionary Faith

It is important to preface the account below by bringing to our attention two seemingly unrelated episodes in recent Malaysian events. Both events have very significant effects on the on-going development of the present pandemic in the country, impacting the social body, both physical and political. The first event was the collapse of the Mahathir Mohamad-led Pakatan Harapan federal government, as a result of parliamentary defections among its lawmakers, bringing back the defeated UMNO into the current new governing coalition, known as Perikatan Nasional. As a result, Muhyiddin Yassin, was sworn in as the new Prime Minister on the 1 March 2020, putting an end to a week of political uncertainty and horse-trading that saw Mahathir Mohamad resigning on the 24 February. While the politicians and lawmakers were busy in their week-long negotiations and private audiences with the King (to determine which candidate commands a parliamentary majority to be Prime Minister), a four-day major Islamic missionary event organized by the Tablighi Jama’at with possibly 16,000 persons in attendance, took place from the 27 February until the 1 March, in Sri Petaling, a southern suburb in the capital city of Kuala Lumpur. This mass public gathering tragically turned out to be the major cluster of Covid-19 positive cases detected thus far (as of May 1), numbering 2,179 cases out of a total number of 6,071 nationwide. The national number of Covid-19 deaths stands at 103 persons, where close to 20 per cent of these deaths belong to this cluster. The on-going consequences of this major oversight was publicly acknowledged by the chief spokesperson and Malaysia’s Health Ministry Director-General, Dr. Noor Hisham Abdullah in his daily Covid-19 press conferences: “I was only informed by my Brunei counterpart about the gathering on the night of 9 March, so we acted nine days too late… The participants by then had already returned to their hometowns, villages and subdistricts… It’s true that Thailand has a bigger population than Malaysia, but fewer cases than us… But they did not have a large Tabligh gathering of 16,000 people in their country. I’m sure if we did not have this gathering, our cases would be less than Thailand’s. The tabligh gathering is responsible for close to 40% of our total cases.”

Is there a discernible strategic coherence that emerged on the part of the Malaysian government’s approach towards containing the pandemic, after the initial delayed response?

At the outset, the Movement Control Order (MCO) was conceived as necessary ‘to prevent the virus from spreading within the population,’ legally enabled by the Prevention and Control of Infectious Diseases Act 1988 and the Police Act 1967. With the National Security Council directing the entire operations on a daily basis, the Malaysian state quickly embraced the increasingly hegemonic global public health discourse of ‘flattening the curve’ in combatting the spread of the virus. What this means on the ground, was the full closure of all Malaysian borders barring any international movement of both Malaysian citizens and foreigners, since the 18 March. The impact of this sudden enforcement was particularly pronounced and felt by the 100,000 or so Malaysians who commute daily to Singapore for their jobs and livelihood. Many were left stranded, with the Malaysian workers requiring emergency housing provisions in Singapore, depending largely on charitable acts by Singaporean citizens and their government. 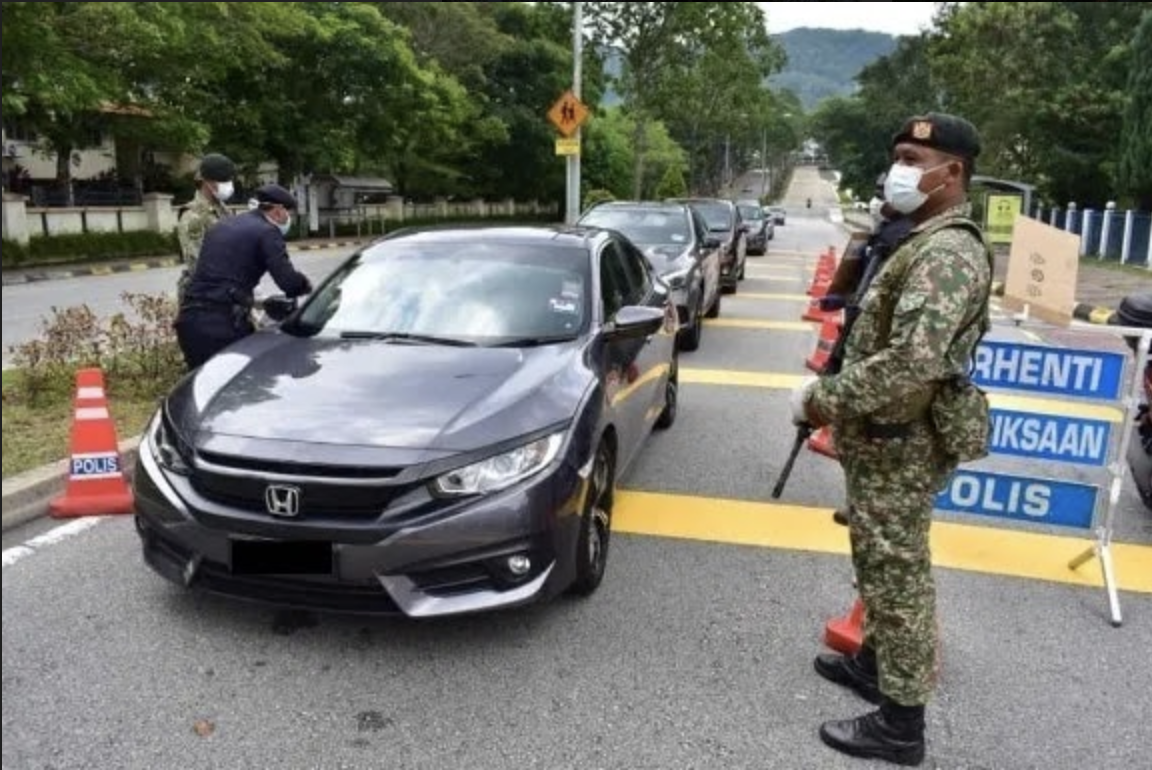 Malaysians also woke up to a new reality since the MCO was enforced, the daily restrictions to their free movement taking the form of thousands of Royal Malaysian Police personnel manning roadblocks all across the country, adding a coercive dimension to what has been largely propagated by the Malaysian media as a ‘voluntary’ or self-disciplined mass effort to ‘stay at home.’ This has been a significant characteristic of the Malaysian ‘lockdown’ experience, where over 24,000 persons has been arrested by the police for violating the MCO, where cases vary from persons arrested for ‘trying to deliver a birthday cake to a boyfriend,’ to more serious allegations of ‘verbally insulting police officers’. Eleven new ‘temporary’ prisons have been set up to deal with this sudden influx of ‘MCO offenders’ in the country’s existing penal geography. 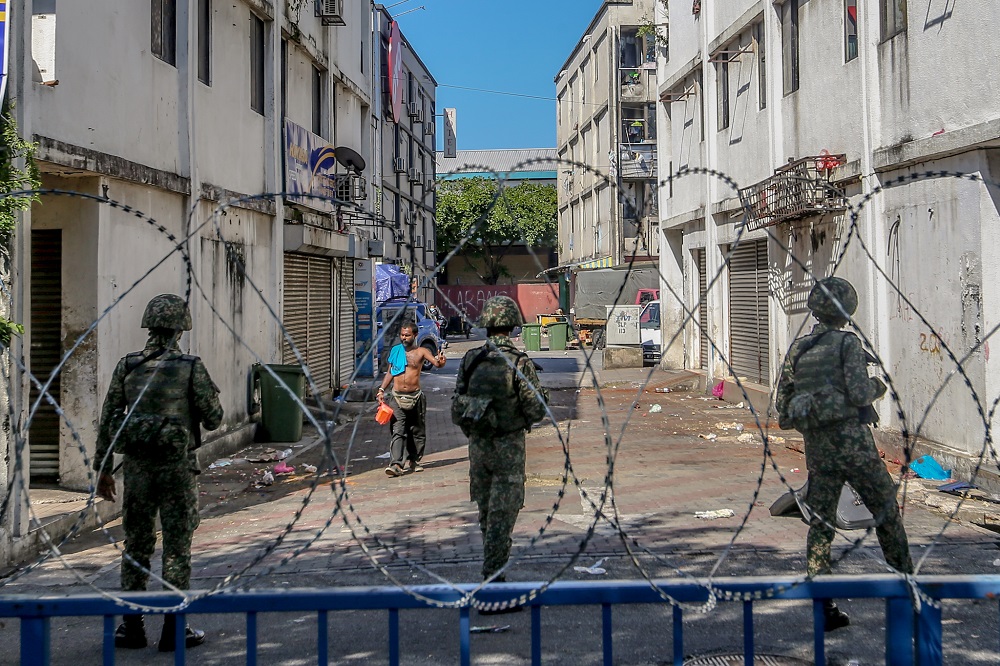 This coercive dimension also materialized in spatial and architectural forms, with the return of barb-wired perimeter fencing, the erection of surveillance watchtowers, the novel use of remote-controlled police drones, and the presence of armed operatives from the Malaysian army in neighbourhoods in the country that are designated as Covid-19 ‘red zones,’ in accordance with the National Security Council’s overall strategic classification of locations according to differing levels of risk to the population (red zones are areas where there are 40 or more, confirmed positive cases of Covid-19, whilst green zones are areas that have no cases at all). These are densely populated, urban areas in Kuala Lumpur (the Jalan Masjid India area and Selayang Baru, for example), as well as entire villages in provincial areas such Simpang Renggam in the state of Johor, all given this form of ‘protective treatment’ called the Enhanced Movement Control Order (EMCO). The visceral images of barbed wires and armed personnel keeping a continuous 24-7 watchful eye on these targeted populations are strangely reminiscent of long-forgotten Malaysian memories of another crisis from another time, the 1950s in Malaya when the late colonial British government was carrying out its counterinsurgent operations against the communists, putting large numbers of the population of that time in protected ‘new villages.’ 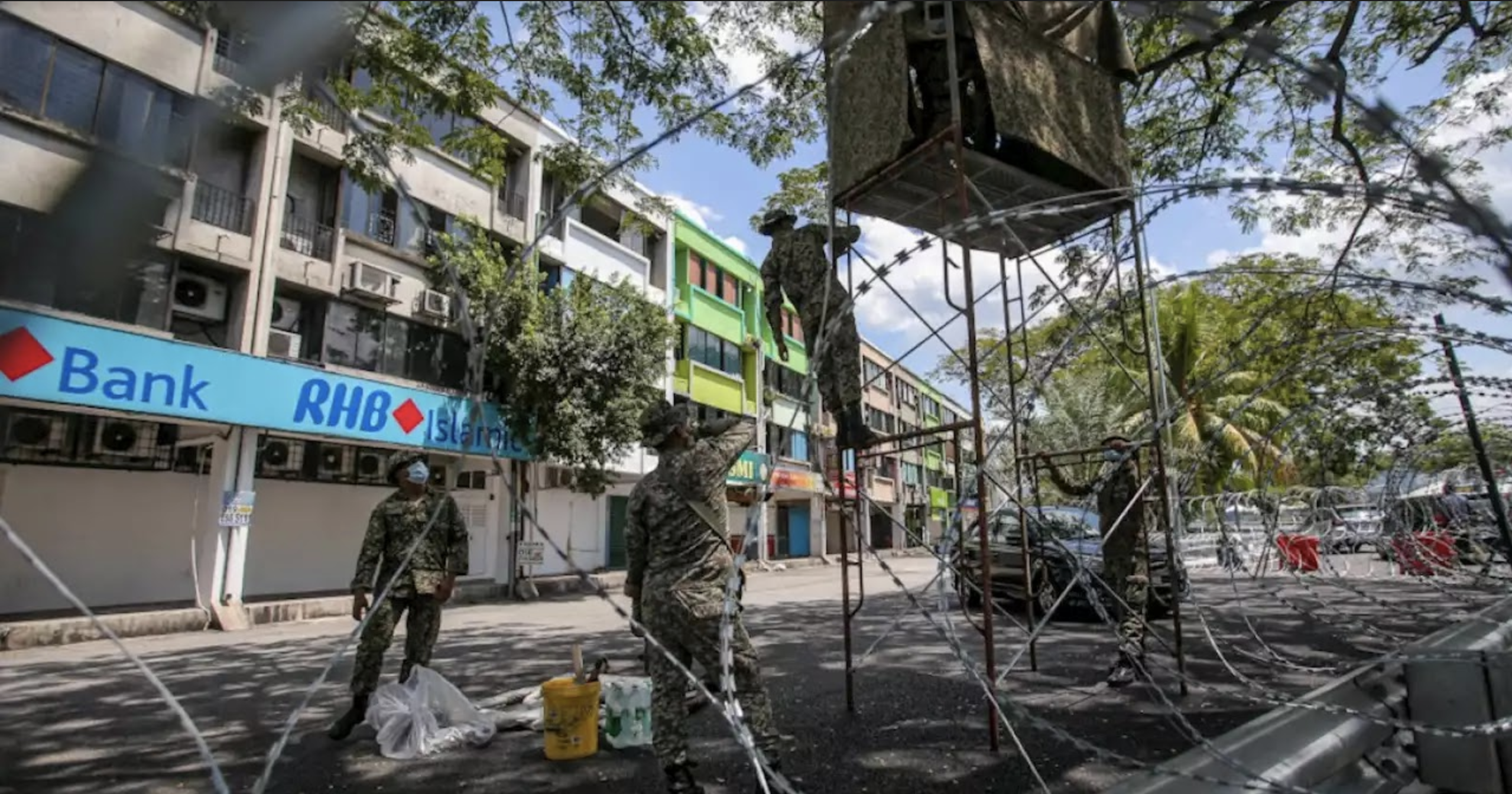 This preferred Malaysian way or approach to dealing with the Covid-19 pandemic, which involves the parsing and segmentation of the population according to specific risk factors, has been confirmed by the Director-General of Health, Dr. Noor Hisham Abdullah, on a number of occasions over the last month. In his daily press conference on April 22, Dr. Noor Hisham provided the clearest summary on the Malaysian government’s approach thus far: “We have often been questioned about whether we should screen everyone. If we were to do mass screening for the whole country, on 32 million people, is it feasible or not? I think we will still maintain our targeted approach, which is based on location and high-risk groups. In high-risk locations, we advise the government to impose an enhanced movement control order (MCO), and we do mass testing in that location. This approach produces a high-impact and good outcome in a short period of time.”

The Biopolitics of Post-developmentalism, Version 2020?

The Malaysian state’s vast experience and modern history (since the promulgation of the New Economic Policy in the 1970s) in ‘targeted approaches’ or targeting specific groups of its population for socio-economic development and regulation, is part of both a wider and deeper history of the dominant, prevailing form of governmentality or governing strategy in postcolonial Malaysia, what anthropologist, Aihwa Ong, describes as the “state makes different kinds of biopolitical investments in different subject populations, privileging one ethnicity over another, the male over the female, and the professional over the manual worker. Different sectors of the population are subjected to different technologies of regulation and nurturance, and in the process assigned different social fates” (Ong 2005, 86).

For the preferred ‘sectors of the population’ in Malaysia today, it is not an accident that the government has been extremely efficient and targeted in infusing the ‘productive’ urban middle classes with financial aid during the MCO, an allocation of US$ 2.312 billion for the 9 million Malaysian citizens eligible under the scheme, via direct cash transfers handled by the Inland Revenue Board for all taxpayers. Contrast this form of state protection and nurture, with the targeted immigration raids to arrest and detain undocumented migrant workers in specific locations under the Enhanced Movement Control Order (EMCO) carried out on the 1st and 2nd of May, where hundreds has thus far been incarcerated on the state’s categorisation of these groups as posing a ‘high-risk’ of infection on the rest of the population.

On 1 May, the Malaysian Prime Minister announced that due to the nation’s economy having suffered a daily loss of US$ 555 million during the MCO period, all businesses will be allowed to re-open, starting from 4 May, in spite of the official enforcement of the MCO until the 12 May. The Prime Minister’s justification for this sudden, albeit conditional, lifting of the MCO, being that “we must find ways to balance between healing the nation’s economy and addressing Covid-19.” There has been a sizeable unhappiness simmering against these new measures, with over 400,000 people signing an online petition to oppose the government’s efforts to ease the ‘lockdown’ (this relaxed ‘conditional’ MCO, the ‘CMCO,’ has now been further extended until 9 June 2020, mainly to limit and control the annual Eid/Hari Raya Puasa travel exodus among Muslims in the country). Perhaps, if the Covid-19 pandemic taught us anything at all, it is that the ‘normal’ ways of thinking about our economy and security is actually part of the problem, not the solution. One thing, though, is for certain. The Malaysian population, both those who govern and those being governed, grows ever more deeply implicated and entrenched in forms of power and subjectivity within this political deadlock/dead-end (depending on one’s perspective or sensibilities) of a security and development nexus. Malaysians can’t seem to find a way out from this false, and extremely narrow, choice between economic recovery or protecting health and lives from Covid-19.

Boon Kia Meng is Deputy Dean (Research) and lecturer in sociology and comparative philosophy at the Multimedia University, Malaysia (Johor campus). He graduated with a PhD. in Area Studies (Southeast Asia) from ASAFAS, Kyoto University in 2018. His research interests include critical ethnography, political anthropology and social movements.