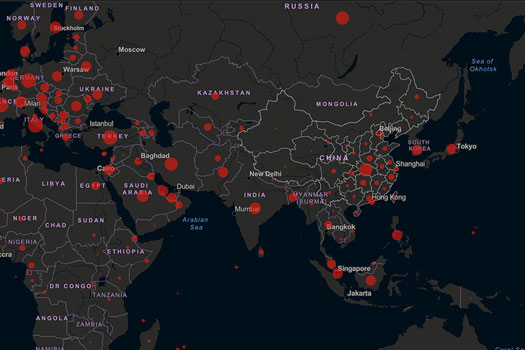 Peru noted its first case of covid-19 on March 6, 2020, when a pilot for LATAM airlines returned from his vacation in Spain. Once this situation was known, “patient zero” was isolated and his family and contacts were followed up.

Peru noted its first case of covid-19 on March 6, 2020, when a pilot for LATAM airlines returned from his vacation in Spain. Once this situation was known, “patient zero” was isolated and his family and contacts were followed up. Other positive cases were discovered among people that patient zero had visited. The first death occurred on March 19, 2020, a 78-year-old man with high blood pressure. On April 5, 100 deaths were registered, on April 14 230, and on April 20, there were 400. In regards to the total number of cases, as of April 20 there were 15,628 registered cases. On April 25 there were 25,331 cases and 700 deaths, and on April 27 27,517 cases and 728 deaths.

The Peruvian state’s response has been drastic. On March 15, a state of emergency was declared, which lasted until April 27 (by Supreme Decree 044-2020-PCM). The emergency decree implied that the rights to freedom of assembly and transit were restricted. Mandatory social isolation and social immobilization were also decreed (from 6pm to 4am). In other words, people are not allowed to leave the house except for essential matters. What is considered essential is purchasing food, medicine in pharmacies or visits to the bank. On March 20, the minister of health was changed, and Víctor Zamora, a global health expert, was appointed as the new minister of health.

With the new minister appointed, new measures were implemented, for example, it was decided that the use of masks was necessary to go out into public spaces. Likewise, Zamora started an information campaign to explain via the press, radio, television and social networks the ways in which the virus spreads. To alleviate the economic impact of the pandemic and quarantine, in an economy that is 70% informal and that depends on daily sales in public spaces, the State implemented economic subsidies of 380 soles (US$ 100) for families with scarce resources.

Concurrently, the Municipality of Lima started a quite successful campaign to promote the population to comply with the quarantine, with the hashtag #Yomequedoencasa (I stay at home), which has had the support of political leaders, artists, and the media.

“The general response of Peruvian society has been to accept -with resignation- the national quarantine, the popularity of President Martín Vizcarra has risen to 80%, and the political actors who called to ignore social isolation are now being questioned.”

The general response of Peruvian society has been to accept -with resignation- the national quarantine, the popularity of President Martín Vizcarra has risen to 80%, and the political actors who called to ignore social isolation are now being questioned. In some regions of the country (such as Piura, Lambayeque, Loreto) there has been more disobedience, yet in general the response has been one of acceptance and resignation. The most repeated criticisms were towards underlying public health problems, such as a lack of beds in hospitals, a lack of respirators and the inability to carry out more tests to check for the disease.

One of the effects of the pandemic has been a reassessment of history, in particular the history of health. The Media such as radio, press and television have repeatedly interviewed and shared stories from health historians throughout the quarantine. In particular, the interest of the press has been in learning about the previous experiences of pandemics, both globally and in Peru, and to search for lessons from previous experiences. In other words, there has been a practical approach to history, seeking successful examples of past experiences that can be applied to our current reality.

Jorge Lossio is a historian at the Pontifical Catholic University of Peru (PUCP) with a PhD from the University of Manchester, U.K. He has published several books on Peruvian history and health from the 20th century, among them, (Traces of Health in the Andes) (2009); Prensa, conspiraciones y elecciones en el Perú (The Press, conspiracies and elections in Peru) (1930-1960) (2015), and Salud Pública en el Perú del siglo XX (Public Health in 20th century Peru) (2017). He is currently professor at the PUCP and Director of the Riva-Agüero Institute.